Today is My Birthday! (....or I shouldn't leave my blogger account open when I go to sleep)

(I will be setting the tent up in the back yard, as I think even the couch will not be an option when she wakes up and sees this)

Email ThisBlogThis!Share to TwitterShare to FacebookShare to Pinterest
Labels: Links

In which I reveal myself as a less-than-committed sports parent.


For the past three weeks, Middle Sister has been attending twice-weekly summer soccer "camp," which runs from 6 to 8 PM, or right during the time in which I'm cooking and serving dinner.  It's also right during prime thunderstorm hours, especially in the heat of July.

Last week, on that very hot day, the team parents got an email:

Coach [name withheld to protect the guilty] is going to try to still have training tonight from 6-8 PM. Hopefully the storms will pass through either before or after the session.

It is suggested that parents stick around or arrange for another parent (or an upperclassman with a car) to account for your daughter in case the storms roll in while we are on the field and we would need to get all of the girls into cars in a hurry.

So we parents are supposed to stick around in our cars in an open parking lot when it's 100 degrees outside during a longer-than-two-hour practice just in case it rains?  That's your genius plan for keeping my kid safe from a possibly dangerous weather situation?

Five minutes later we got another email:  "On second thought, practice is cancelled." 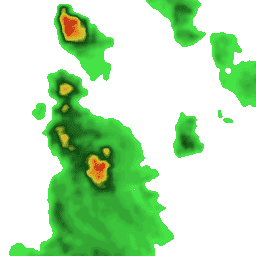 But tonight, while it's 10 degrees cooler, we've got thunderstorms threatening.  I'm consoling myself with the fact that we live so close to the school that I could probably drive to the parking lot faster than the soccer kids could get there from the field.  And I'm going to keep the phone handy during dinner, because if it gets any darker out there, I want to be ready to zip right over there.

Really, coach, when there's any yellow and red in the radar, it's time to call it a day.

And the thunder rumbles...

Email ThisBlogThis!Share to TwitterShare to FacebookShare to Pinterest
Labels: Sports

Boy, it would be cool to have nothing at all to do all summer long but read.  I'd go for that in a heartbeat.  I have been reading (every chance I get) and I've jumped back on the Goodreads bandwagon to track my books.

Two of my kids have summer-reading assignments.  Middle Sister's school has a "One Book, One School" policy where students, faculty and staff all read the same book for the summer.  This year it's The Hunger Games.  While at first I thought the school was selling out by choosing a popular book like that, I've changed my tune; I read the book (and the rest of the series) and there is a LOT in there that high-school students can discuss and analyze--and not just in English class.

Little Brother is required to read two books.  One, A Dog's Life, is required, and he has a generous list of others from which he must choose one more.  He's worked his way through most of that list (Encyclopedia Brown, anything from Dan Gutman's "Baseball Card" series, and a few others) but he steadfastly refuses to touch one of the books:  Charlotte's Web.

I'd almost let him take a pass on that if he'd said that it's a girls' book.  But he has not used that as an excuse.  "It's too big" doesn't fly with me, since last summer he read all the Harry Potter books.  Then he tried, "It's a children's book!"

"Yes, and you're a children," I retorted, using grammatical incorrectness to make a point.

Since he's in the middle of A Dog's Life, I asked him how that one was going.  He said that so far it's a sad story, and launched into a long tale about dogs being left by the side of the road by "one of the wives in the couple," which led Big Brother to muse that this is really a book about Mormons.
Posted by Barb Szyszkiewicz at 7/22/2012 05:29:00 PM 3 comments:

The Agony and the Dentistry

Want to really see me go over the edge? Send me to the dentist. It's definitely a Near Occasion of Anxiety for me.

I have cried at the dentist's before, when I was told just how much work had to be done. I think this was either shortly before or shortly after Little Brother was born. I remember being so upset that day that the dentist decided not to start the work then, because I was just barely keeping it together.

The past couple of years, I have avoided the dentist. I have neglected my own dental health as well as my children's, because none of us liked the dentist we were seeing (what did it for me: she asked if all my children were "from the same marriage.") And then Middle Sister chipped a tooth and I had a loose crown, so we went to a new-to-us dentist on Wednesday.

I was holding it together well, I thought, even though Middle Sister took every opportunity to light into me for not keeping up on her dental care. I listened to him explain that I would need a mouth guard because I grind my teeth, and that he didn't like the looks of the crown; it would come out again, he said, if I didn't take care of the grinding. I stayed calm. I took the news like an adult and figured I'd just deal with it.

I did not expect to lose that crown 3 days later while eating fajitas. I'm just glad it happened in my own home. But now I look like a hockey player (it's a canine tooth), and I can't get an appointment until Thursday to fix this.

I have 3 more days to wig out, and I'm doing just that, thankyouverymuch. I really wish that I had just insisted on getting all my teeth pulled out on that day years ago when I broke down in the dentist's office and had to be sent home.

Is there Novocaine that works on the emotions? Because I need some.

Talking Tech (and Text) at CatholicMom.com

Come on over to CatholicMom.com and visit me in the Tech Talk section!  This week I'm talking about why text messages and teenagers can be a GOOD combination!
Posted by Barb Szyszkiewicz at 7/10/2012 07:51:00 AM 3 comments:

I'm a digital packrat of the most incurable kind.  That whole "I might need this someday" thing rears its ugly head; I still have 5 1/4" floppy disks with my college senior thesis on them.  Not that I have any software that can access the files, and it's been at least 5 years since there was a computer in this house that accommodated ANY floppy disks, but I've got those disks...

I use gmail for most of my email, but I have it forwarded through some complicated electronic system or other so I can read it in Outlook on my computer.  Therefore, I never go to gmail's site unless I need to check the spam folder for something that was misfiled.

And it didn't kill me or cause bad things to happen to my family. At least, that's what I keep telling myself.