Is This What "Choice" is All About?

This week in Philadelphia--only a few miles away from here--an abortion-clinic doctor was charged with a crime.

It's about time that it was described in these terms.

Is this what "a woman's right to choose" is all about? Why yes--yes, it is. This "choice" is always murder, pure and simple. Because someone is always being killed. Most of the time, that killing is covered up with excuses like "it's only a clump of tissue" but advances in medicine, including 3D ultrasound, show just how human, just how alive, a preborn child is. 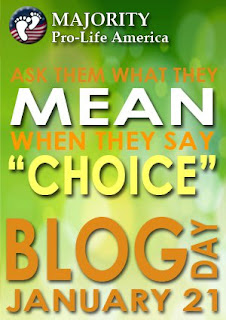 There are only two good things about this case. First of all, this doctor and some of his staff are being held without bail. We can reasonably be sure that the unspeakable deeds that took place under his "care" will not be happening in that clinic again.

Second, this takes place on the eve of the 38th anniversary of Roe v. Wade. And this case has people talking. This case has opened up people's eyes to some of what is going on in these clinics, under the guise of "choice."

It's time to tell it like it is. Stop with the euphemisms already. Abortion is murder, and it's about time we stopped pretending that it isn't by dressing it up with more-palatable words.

Email ThisBlogThis!Share to TwitterShare to FacebookShare to Pinterest
Labels: Prolife

Very very true. What they do makes me ill.

Exactly, Barb. And what really gets me is, under the term "choice," there's only a few inches in the birth canal separating what he's rightfully charged with and what the law calls legal termination. Ridiculous. It's murder.

This was so sick...all of it is so sick.

Good on you, Barb.