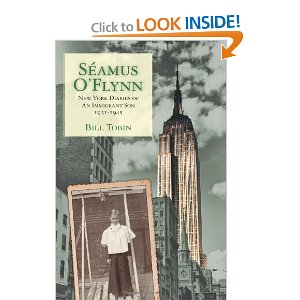 It's the coming-of-age story of an Irish-Catholic New York City boy during the Great Depression and World War II.  It could be your great-uncle or grandfather telling the story, if you're Irish.  It's a young boy's version of A Tree Grows in Brooklyn.

Bill Tobin's book Seamus O'Flynn is an engaging story that reads like a memoir.  Subtitled "New York Diaries of an Immigrant Son 1931-1945," this book chronicles young Seamus' adventures, from the first day of school to pickup baseball games.  Bill Tobin eloquently describes all of Seamus' haunts:  his apartment building, a few wooded areas in the Bronx, his favorite swimming spots.

Life is not easy for a child of immigrant parents during the Depression and war, and the reader learns of Seamus' struggles with hunger as well as his technique for avoiding subway turnstiles.  There are funny moments, sad moments, and a seemingly-gratuitious moment of abuse by a priest (I really felt that the story could have done without that one--it just feeds into stereotypes).

Overall, it's a good novel that feels like a biography.  I had to keep reminding myself that it's fiction.  If you liked Angela's Ashes, you'll like this book.
Posted by Barb Szyszkiewicz at 8/02/2011 03:22:00 PM