Thank you for the birthday wishes I received here after TheDad "hacked" my blog on Saturday.  I received some nice presents:  a doughnut pan and extra-large dark chocolate bar from Middle Sister, a Pullman bread pan from Big Brother (yes, I asked for kitchen stuff for my birthday!) and on Sunday, TheDad is taking me into New York City so we can see "Sister Act" on Broadway.  That's going to be fun!

Little Brother and the Street Urchins are making me crazy here.  Two are taking turns with "Bop It" and the third is playing a "Paper Jamz" guitar.  Let it be known that I am not responsible for bringing either of those nefarious, noisy toys into my house.  It's almost at the point where I'm willing to let them play a video game just to shut them up, except that I suspect that this is their evil plan, so I'm holding out as best I can. 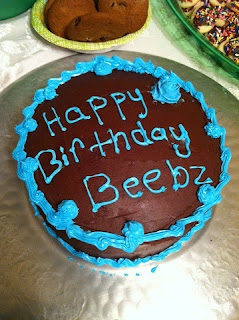 I spent 6 hours of my birthday in the car (with my family) so we could go to my sister's and celebrate my niece's graduation.  It was worth the trip.  This is the longest car trip I've taken since right before I had surgery in April, and I'm not gonna lie:  it took its toll.  I had a backache until Monday.  But it was great fun to spend time with my family, and one of my other nieces made me a birthday cake from scratch, featuring the new nickname she and her sister have bestowed upon me.

I am coming to terms with the fact that while my weight has not changed since surgery, things have rearranged a bit, so some of my clothes no longer fit.  Actually, I had to break down and buy a couple of pairs of (gasp!) Mom Jeans, since those are the only ones with a high enough waist to work.  Waistbands and incision scars don't mix well.  Middle Sister is going to be horrified.  But I'm looking at it this way:  most people who have surgery at a cancer center cannot say that they're relatively healthy--I can.  I came out of the whole thing with a large scar, hot flashes every hour, and a fashion challenge.  There is every reason to be grateful, even for the Mom Jeans.

Beebz is a funny nickname. Your nieces must love to bestow such silliness. The cake looks delicious. And no one has to know they're mom jeans if you wear tops that don't show the high waist. ;)

*love you to bestow such silliness, I mean.