Just Because It's Legal Doesn't Make it Right 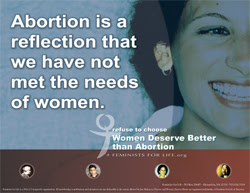 And it doesn't make it safe, either.

Don't believe everything you read in the newspaper. Today's story on abortion is clearly and completely slanted in favor of the procedure.

I wish I had a scanner so I could show the graphic that appears in my newspaper, but not online. A picture is worth 1,000 words, but the words will have to do here.

Since when is the word "safe" defined as "free from legal restriction or repercussion?" I can't find that definition in any of the several dictionaries we have around here. But if that definition is valid, then I've been wrong to tell Big Brother that he shouldn't climb around on the roof, and I should have let Little Brother vault over the back of the living room couch onto the stairway below.

Read the linked article carefully. Who's quoted? People from the Alan Guttmacher Institute (the research arm of Planned Parenthood), the World Health Organization and the International Women's Health Coalition. All of these organizations have a vested interest in keeping abortion legal.

However, they don't have a good track record for keeping it safe--not even here in the USA! Christine at RealChoice, Jean at Catholic Fire and Jill Stanek, to name just a few, have more horror stories than I can stomach on the lack of true "safety" in legal abortions. Right here in New Jersey, there have been plenty of recent stories on the subject: Atlantic City and Englewood.

That's safety for the mother that is being discussed here. Of course, abortion is always 100% unsafe for the child.

It might be legal, but it's certainly not right. And it's not safe, either.

UPDATE: Lifenews.com has more information that proves the inaccuracy of this article.

UPDATE #2: Aggie Catholics asked a statistician to take a close look at the charts and figures.

Email ThisBlogThis!Share to TwitterShare to FacebookShare to Pinterest
Labels: Prolife