Santa gave me a new camera for Christmas, which is great because my old camera bit the dust just before Little Brother's First Communion, and the crummy point-and-shoot I bought, in a hurry, so I could get pictures of that special day was, well, crummy.

Little Brother was happy to take it off my hands. For an 8-year-old, it does just fine.

Middle Sister has been enjoying my camera. She's 15 today, so I trust her with it. She has a good eye. I love this picture of some of my favorite Christmas decorations. 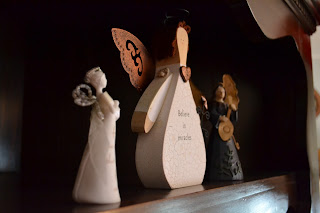 Here's a shot of my Christmas tree, which I briefly got to light up again.  The lights went back out sometime yesterday.  Apparently I'm burning through the extension cord.  Guess it's time to use 2 cords for this many lights (about 1600).  I took a break from cookie baking on the 23rd to replace the cord that I had originally used. 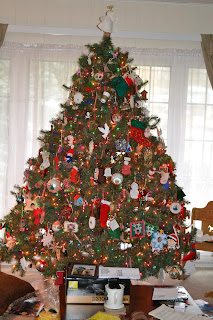 Last, two pictures of the results of the snowstorm.  There will be more later but I don't want to go outside yet!  One is of my across-the-street neighbor's house; I thought their Christmas lights looked cool in the snowstorm.  The other is around the edge of my pool, where the 40-mph-winds created a moat, exposing the rocks around the sides. 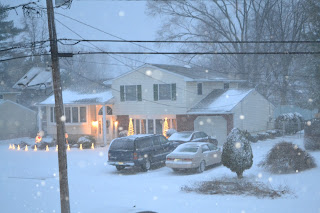 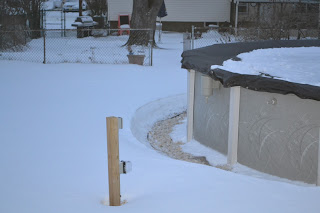 I love your new photos! I especially love getting a glimpse at things you have written about - and that snow photos is beautiful. Thank you and enjoy your snowstorm!

What kind of camera did you get?

Lee, it's a Nikon D3100. More features than I could ever hope to learn to use, but boy does it take great pictures.