Santa Claus Goes to Our Church

Santa Claus is an usher at the noon Mass at our parish, except during November and December when he's extra busy.  Kids who attend the noon Mass are used to seeing him there all year 'round, and have been known to tell their friends that Santa Claus goes to our church. 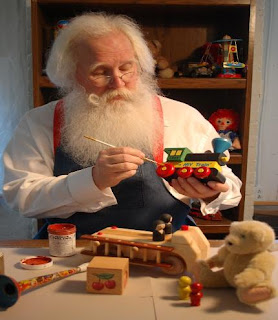 Santa wears red (and sometimes green) regardless of the season, and is always happy to take a break from handing out bulletins after Mass to talk to children.  Last November, before his schedule forced him to switch to an earlier Mass for a couple of months, he gave out little cards to the children with his picture on it and the message, "I saw Santa today, and he said I'm on the Good List."

On the Sunday after Christmas, Santa is back in his usual spot as an usher, sporting his red parka.  You can see that the kids are all watching him:  Santa is here!  After Mass, they like to go and greet him.  Little Brother makes it a point to thank Santa for his Christmas gifts.

I'm grateful this year that the magic of Santa Claus is still alive in my home.  Little Brother and Adventure Boy still believe.  In fact, just before Christmas, there was almost a fistfight in here when one of the other Street Urchins suggested that Santa might not be real.  It was 3 to 1 FOR Santa, I'm happy to report.  I'm sure that our Christmas Eve tradition, as well as Santa's quiet presence in our church, have plenty to do with that.

Email ThisBlogThis!Share to TwitterShare to FacebookShare to Pinterest
Labels: Christmas

and I thought Santa went to my church. His name is JH and would rather be on a kayak than sleigh. I am glad that you too are blessed with a kind hearted soul.