Reelin' In the Years 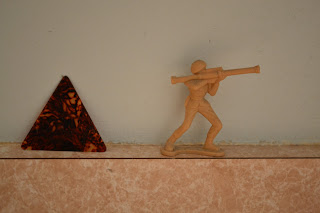 Middle Sister had four of her friends here earlier, and they were all lining up to primp in front of the bathroom mirror before I drove them to the football game.  As she left the room, one of them asked, "Is there a guitar pick in your bathroom?"

She never asked about the Army Guy, who stands only about an inch away from the guitar pick.  He's been guarding the bathroom for at least 3 years now--possibly more.  It's been so long that he's part of the landscape, and when I clean the bathroom I just put him back on the counter, in the same place he was before.

Sure, it would be easy enough to carry the Army Guy over to Little Brother's room.  It's only across the hall.  For that matter, I could just toss the Army Guy in the trash can.  Earlier this week, I cleaned out the family-room closet and toy box, and boxed up all the Army Guys along with the other stuff Little Brother no longer uses.  My guess is, he'll never notice it's gone.  After a suitable interval, I will donate the usable toys to our school's pre-K or Goodwill.  (Tuesday's good.)

I can't get rid of everything, though.  When I pulled the battered copy of The Very Hungry Caterpillar off the bookshelf, there was no way I was putting that into the donation box.  The same goes for the entire "Little Critter" series (Middle Sister was a big fan) and The Little Engine That Could, which we memorized during Big Brother's childhood and hid during Little Brother's.  We just couldn't go down that road (track) again.

Some people have scrapbooks, all beautifully decorated and labeled, full of photos of their kids.  I've got their entire libraries, as well as a few Army Guys, Matchbox cars, and an American Girl doll.

I kept almost all of the books my children enjoyed when they were young, and quite a few of their toys, once our grandsons arrived on the scene the books came out of the attic to be enjoyed again along with the toys.

I've kept selected things of my son's youth. Though, there is one disposal that I regret - a Sesame Street play set - it was a favorite and when he wanted one of us to play with him and this toy, he used to ask us to "make a house?"