Twice now, in the past couple of days, the issue of how to properly pray the Liturgy of the Hours has come up. 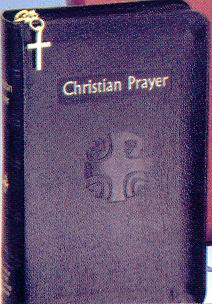 As a Secular Franciscan, I am committed to praying the Liturgy of the Hours, in union with the Church.  I generally don't get beyond Morning and Evening Prayer, but the expectation of us in this Order is that we pray at least those Hours, whether in common or in private.  Now that my fraternity meets during the day, we have begun praying Midafternoon Prayer at our meetings.

We don't all, however, have the same breviary.  Most of us have the one-volume "Christian Prayer" version, but a few use the four-volume set.  I used to type out the prayer for that day's meeting, but it would change with the week and with the season and that got to be a huge time sink, not to mention the use of ink and paper for 15 copies--so now we just muddle through together, with all the "what page is it on?" and other general fumbling that goes along with it.

We've discovered recently, though, that the folks with the four-volume set expect that the antiphon will be repeated after each psalm or canticle, before moving on to the next.  In the single-volume format, it's not indicated anywhere that this should be done.  This has gotten us into a few liturgical traffic jams recently.

I brought up the issue at our November council meeting, and together we worked out a plan.  Before beginning prayer at the December meeting, we would introduce the idea of the repeated antiphon to everyone--and one of the owners of the 4-volume Breviary would be the antiphonarian.  While we were at it, we worked out solutions to a couple of other technical difficulties that other council members had noticed.  It was all good.

At the council meeting on Tuesday, I reviewed the plan.  We had a few members sitting in at the council meeting, because we had been working on a project before that.  The council did not mind having a more "public" meeting this time; it wasn't like anything sensitive was going to come up.  Most of the members just listened and let us do what we had to do, until we got on the subject of Liturgy of the Hours.

At that point, someone commented, "I don't think God cares very much exactly HOW we do it, as long as we do it."

Daria Sockey wrote, yesterday, about the challenge of fitting in the Hours when you have a busy family, a demanding job, or nowhere quiet to pray (or all of the above!)  She quoted G.K. Chesterton:  "A thing that is really worth doing is worth doing badly."

Badly when that's the best we can do?  I can live with that.  I do live with that.  I'm sometimes praying with the theme song from Phineas and Ferb as my background music; other times, I've got Little Brother in my face even though I try to gently remind him that I'm saying my prayers now.  A home with a family in it is not often a quiet refuge for prayer.

But when we can do better, we should.  I think that we should give God the best we've got.  If the best we've got is interrupting kids, then we offer that.  On the other hand, if we are together in fraternity, in a nice quiet location, and capable of making a little extra effort to ensure that we are all united in prayer, we can go that extra mile.

Repeating the antiphon is a little thing--there's no doubt about it.  But it's those little things, those little efforts and sacrifices, that can bring us closer to God, a little at a time.
Posted by Barb Szyszkiewicz at 12/08/2011 07:03:00 AM

Exactly! I love this!

A good analogy is dressing up for mass. True, God is glad to see us however we're dressed. So if the family is in the middle of a camping trip, or would be late otherwise, or doesn't have any dressy clothing, then fine, go to church casual. But if we can dress well for mass, it is better, not for God, but for us.