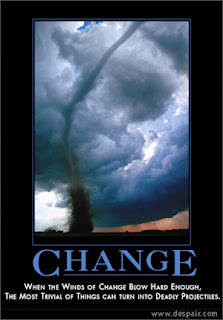 Recently I read this on a blog by a local priest (whose parish was not affected by the mergers):

“Over several months, we have known about the restructurings and changes among our neighboring parishes and diocese. It is unfortunate that some of these Catholics have transferred parishes in protest of these changes.

I have a lot of respect for this priest, and in some cases, he is correct. But there's a lot more to it than he describes. It seems to me that he is only talking about one group here: the "takers" who show up, receive Sacraments and religious instruction for their children, but never contribute to parish life. I have seen friends, neighbors, and acquaintances, both the “givers” who do much for their parish, and the “takers,” throw up their hands in anger and walk away from their parish. Some of them walk away from the Church entirely. Others find other parishes in which to pray and serve.

In the case of my newly merged parish, I have heard people refuse to go to The Other Church for no other reason than the fact that it is The Other Church (and that’s sad). Now that the Mass schedule has been changed, some would rather change what time they attend Mass rather than change the location. I will admit to harboring a location preference myself, and I rationalize that preference on purely architectural and aesthetic grounds. But in a few months, my preference will mean nothing, as the choir I sing with will take its turn at both locations.

I’m still working my way through Death by Suburb by David L. Goetz. There’s an interesting chapter titled “Lashed Down” which addresses the issue of thinking that “my church is the problem” and the spiritual practice of “staying put in your church.” This is discussed from the Protestant perspective of not only switching parishes, but denominations as well. But Catholics can certainly glean interesting food for thought from this chapter. One highlight:

“Freedom does not always mean going…freedom often means staying. That’s certainly true of the Christian understanding of marriage. Staying with one partner over a lifetime opens me up to the goodness of God in a way that serial monogamy doesn’t. Church is another place where freedom means staying.” (p. 125)

“The maddening frustration that prompts someone to leave one chruch for another, however, may be precisely the experience that triggers spiritual progress if one stays.” (p. 135)

It all comes down to the fact that everyone needs to realize that we are all on the Same Team. It doesn’t matter about which “worship site” you prefer. It doesn’t matter which church is your parish of origin. Right now, it’s time to join together. It’s time to compromise on who gets the naming rights for the various ministries and who gets the coveted 5 PM Mass. It’s time to stop the name-calling and ethnic slurs that have no place in any church, ever. Our church is under enough attack from the outside to let this destroy our parishes from the inside. I hope and pray that our strength will come from staying, and staying together.

Email ThisBlogThis!Share to TwitterShare to FacebookShare to Pinterest
Labels: Church