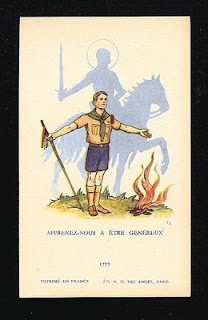 The caravan departed today for Boy Scout Camp. This is TheDad and Big Brother's fifth year of summer camp together.

Good thing St. George is a powerful patron. I had to sign various scary forms absolving the camp from any responsibility if my son is injured (or worse) in the rapids where he'll be canoeing and rafting, or in a cave, or on a mountain, or wherever else the "High Adventure" group will go. I'm sure Big Brother will have a great time. I, on the other hand, will be a nervous wreck.

TheDad says that this is why they don't let moms come to camp. Dads don't mind as much when the boys get muddy on the first day and stay muddy all week. They don't mind the boys' aversion to the camp showers (though they do insist that the boys make some attempt at getting clean before leaving camp). They don't get too nervous when they see the kinds of dangerous stuff the boys will be doing (woodcarving, anyone? Building bonfires? Class 4 rapids?)

It's going to be a hot week in Roanoke, VA. TheDad really feels the heat, and those tents aren't air-conditioned. There's no internet access either. He's also giving up a week's vacation from work, home-cooked meals, time with the rest of the family, and a comfortable place to sleep. And leaders don't camp free--he PAYS to go on this trip. That's what makes him a great dad.

So this week I will be "two men down." I will be worrying about them while they're in the heat and on the river. I'll miss having them around, to talk to and to feed, since it's much less fun to cook for 3 than for 5 (they're my most appreciative eaters!) And on a totally shallow note, I'll be missing my XM radio since I offered to let them have my van. It's a long drive and this way the boys can watch movies.

Please keep them and all the Boy Scouts in your prayers. It's a wonderful organization and it's been great for Big Brother. Even the Pope supports it:

"For one century, through play, action, adventure, contact with nature, life as a team and in service to others, you offer an integral formation to anyone who joins the Scouts. Inspired by the Gospels, scouting is not only a place for authentic human growth, but also a place of strong Christian values and true moral and spiritual growth, as with any authentic way of holiness.

The sense of responsibility that permeates Scout education leads to a life of charity and the desire to serve one's neighbor, in the image of Christ the servant, based on the grace offered by Christ, in a special way through the sacraments of the Eucharist and forgiveness."

The Pontiff encouraged the brotherhood of the Scouts, "which is a part of its original ideal and makes up, above all for young generations -- a witness of that which is the body of Christ, within which, according to the image of St. Paul, all are called to fulfill a mission wherever they are, to rejoice in another's progress and to support their brothers in times of difficulty."

"I thank the Lord for all the fruits that, throughout these last 100 years, the Scouts have offered," he said. He encouraged Catholic Scouts to go forward on their path, offering "to boys and girls of today an education that forms them with a strong personality, based on Christ and willing to live for the high ideals of faith and human solidarity."

Benedict XVI's message ends with advice from Baden-Powell: "Be faithful to your Scout promise, even when you are no longer young, and may God help you to do so!"When man seeks to be faithful to his promises, the Lord himself strengthens his steps."

H/T to Micki for the image of St. George, patron of Boy Scouts, and to Father Jay Toborowsky for the text of the Pope's message.