May, the Month of Mary 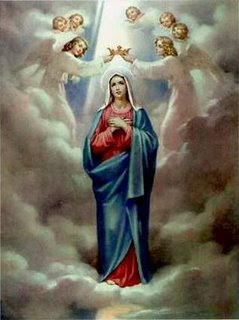 In the month of May we honor the Blessed Mother in special ways. At Catholic Culture, we can find a wealth of practices and prayers that honor Mary. Moneybags has a wonderful post about the Power of One Hail Mary, and the illustration he used was so beautiful that I am republishing it here.

One devotion that I have recently begun to practice is the Franciscan Crown Rosary. Friar Charles has the whole story on this devotion, including how to pray it and where it came from. You don't have to be a Franciscan to pray the Franciscan Crown. It's based on the Seven Joys of Mary:
The Annunciation
The Visitation
The Nativity
The Adoration of the Magi
The Finding of Jesus in the Temple
The Resurrection
The Assumption and Coronation of the Blessed Mother

Franciscans have a great devotion to Mary:

So if you're looking for a new way to honor the Blessed Mother, why not learn to pray the Franciscan Crown? Join me in this beautiful devotion during the month of May.
Posted by Barb Szyszkiewicz at 5/01/2007 08:05:00 AM

Email ThisBlogThis!Share to TwitterShare to FacebookShare to Pinterest
Labels: Mary